This August 2005, I attended the 50th Anniversary luncheon of the Financial Women’s Association in San Francisco that had 13 past Presidents of the organization in attendance. The FWA was ramping up for their annual fundraiser The Financial Women of the Year Event, which hopes to raise over one million dollars in scholarship funds to support women who want to go into the financial services industry. There goal is to help level the playing field between men and women.

Men still dominate the ranks of the financial world especially in the higher echelons. It is rare to find a woman in the highest senior levels or on the Board of Directors for a financial company (or any company for that manner). It was even rarer to find one fifty years ago when the FWA was founded in San Francisco.

I had the honor of meeting some of this brazen women pioneers who passed on the traditional jobs of teacher, nurse or housewife in the 60’s and 70’s and instead opted for a position in one of the most lucrative businesses there is: Banking and Financial Services. Many of the past Presidents were honest in saying that it wasn’t easy to be a trail blazer.

Judith Bedell, President of FWA in the 70’s was very outspoken on how women’s attitudes towards work have changed over the last fifty years. She felt that women had so much more to prove in her era than they do today. The year Bedell became President of the FWA (pictured in 1975 in the San Francisco Chronical on left), she not only had a baby (a huge achievement by my standards), she also ventured out on her own to start Bedell Investment Services, www.bedellinvest.com.

When I had my child, I was doing the exact opposite; scaling my work life back quite a bit and wrapping my head around binkies, diapers and all night wake up calls. But then again, I am a different generation with a different view.

Bedell talked about how she struggled to set up a day care facility for her children and other working women who needed a safe a trusted place for their wee ones when mom was toiling away on the job. Daycare just didn’t exist then like it did today. These women didn’t want to give up their career to stay home once they had their children. They wanted to succeed (even if it was considered a man’s world at the time) and they were willing to make the necessary sacrifices.

However, many of them agreed that they had difficulty finding a sane balance between their work life and family life. I would imagine they often asked themselves – What am I doing? How much can I really fight the boy’s-club establishment? In fact, some of the early women in banking had to be smuggled in the back door of men’s clubs where their corporate meetings were held, because women were not allowed in these clubs. Imagine that! More often than not, these past Presidents found themselves stifled by the glass ceiling and suggest that things haven’t changed that much. Read journalist Kathleen Pender’s take on this topic: The Glass Ceiling is Still Intact.

Judith will be the first to admit that the “glass ceiling” is the reason she left to start her own firm over 30 years ago. She was certainly a visionary for her time and realized pretty quickly her odds for success would be much greater on her own. At least she would be in charge of her hours and how she would divide it between her family and her career. The following 5 Presidents of the FWA after Judith all gave birth to children while in the office. They joked that you shouldn’t take the position unless you were willing to get pregnant. Judith said, “We all defined ourselves as Mothers first then as Business women.”

This surprised me that these women formed their identity primarily around motherhood since they weren’t fitting the traditional molds during that period. Just the previous week someone at a party asked what I did, and instead of giving my usual Ms.Money entrepreneur response, I said: “I am a Mom.” And I didn’t add anything to it. Finally after 3 years of being a Mom, I have admitted that I am first and foremost just that – a MOM – even more than I am a business woman. For someone so career minded like me, this is a big shift.

I am not the only one going through this metamorphosis. Interesting enough, highly educated women all over the country are transforming the same way. In 1971 only 4% of women had MBA’s, today 50% of graduate degrees are awarded to women. A recent survey found that 22% of women MBA’s are deciding to stay home and take care of their small children. We are deciding to give up those jobs our mothers and grandmothers fought so hard for. I was looking at a cross-section of those early women leaders right there at the luncheon and wondered what they thought about this. Did they think their efforts were in vain?

I believe that our new generation of women know we can handle any kind of job, deal with any kind of discrimination, and fight until we prevail. But at what cost? I think the educated women of today have decided that we have nothing to prove anymore. We know the glass ceiling exists and we no longer feel compelled to have to break through it. Many of us know that if we really wanted to we could find a porthole through to the top. But then what? How realistic is to be on the other side and still maintain a healthy relationship with oneself and rest of one’s life. For some it may be possible, I just know that I wouldn’t be able to handle the stress and long hours of commitment and still feel refreshed, patient and nurturing with my loves ones at home, whether it is my family, friends or even my dog.

I am not the only one who wants more balance in my life; women everywhere are making these same choices. I wrote a segment on this topic for the book: Inside of the Minds of Leading Women What it Takes to Succeed and Have it All in the 21st Century.

I try to give women tips on how to maintain their sanity in a whirlpool of work and also let them know you can have it all, but not all at once, hence my decision to be the CEO of a multi-million dollar enterprise in my early thirties and then take a long break in my late thirties to raise children.

As a final point of discussion at the luncheon, I brought up the 60 Minutes segment that was aired last year about highly educated Mothers Staying at Home. In this report it interviewed Harvard women MBA’s who chose to stay home with their children. These women cited that they would like to go back to work part-time doing the work they love with the same level of respect and responsibility but just didn’t see those options available to them. I wanted to hear if these past Presidents thought this was a possibility. I asked what options financial services corporations were providing their stellar employees who only wanted to work part time on the same type of things they did during full-time. The impression I received from their answers is that they didn’t think it could be accomplished.

Some of these past presidents said that a male dominated corporate environment had difficulties understanding what women needed in flextime. Others said that at their corporation the men were taking off work early to see their kids soccer game the same amount of time as women. I found this hard to believe. Some attributed this to the divorce rate where men were forced to equal parent. Other’s said that if women are in a commission based role then as long as she meets her quota then the rest of the time is her own. Well, I would agree this is a great position for a women, but typically it takes a full week of work to make a full commission. One President commented that they thought a woman could not maintain her career status working only thirty hours (three days a week), four days a week maybe, but that often means four twelve hours days which is essentially full time work.

My hopes are that there will be a few successful professional corporations that come up with solution to keep these talented women in the workforce where they can find the same quality type of work they had before they left their jobs to stay home. I feel blessed that I can decide how much to work each week because I run my own company. This is the main reason that women start businesses at twice the rate of men. We want to be our own boss and make sure we etch out time for the important things in life.

Photos from the Luncheon: 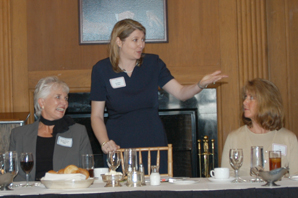 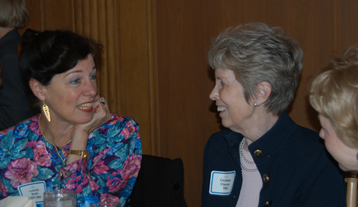 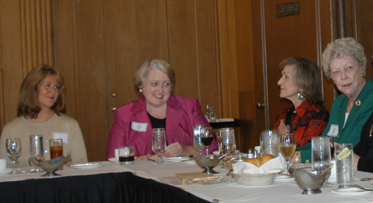